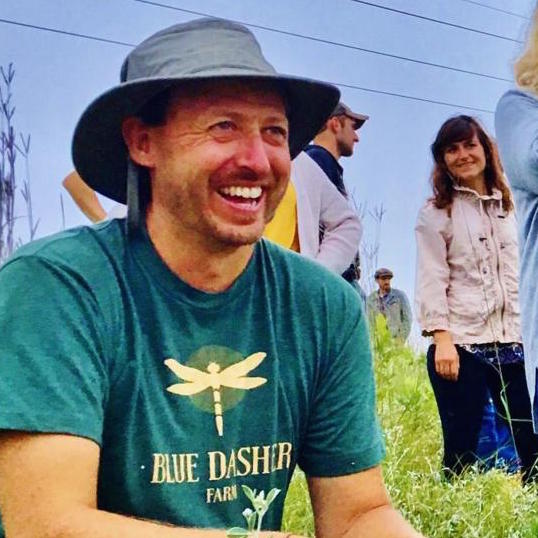 In this mini-series I speak to leaders with LAND USE ADAPTATIONS to fight against climate change, biodiversity loss, malnutrition and hunger. Tune-in for a dose of optimism.

LAND USE ADAPTATION: the 6-part miniseries >>

The planet needs a paradigm shift in our food.  Nature has been shouldering the externalities from our input-based and extractive models of food production.  In the contemporary world, that’s just not going to cut it anymore.  Demand for differentiated value-based food product is skyrocketing, while conventional commodities have begun to melt under new pressures & economic strain.

We’re bumping-up against planetary boundaries. That’s a pressure-point which will change food and how we’ll manage regenerative natural resources.  So, it’s time for a change, but what gets us there the quickest? Our guest today says that what’s missing is modern science. That this science must become a pillar in every regenerative effort, and with all thinking in order to gain broader adoption.

Scientific analysis on the oodles of rich data being pulled from all kinds of different farms within diverse regions, sizes and crop types is needed to instigate regenerative from a slow evolution – to the revolution. The millions of data-points-of-light coming from the 1000 farms will be used to measure outcomes inline with best regenerative food production principles.  Jonathan explaines that a simple scoring matrix can make some in-tune predictions. What they seen already is that the more regenerative farms have higher values in this desired Regen outcome matrix.

On all studies at the Ecdysis Foundation each scientist must also be a farmer.  Dr. Lundgren believes the scientific community should rethink what applied science really looks like in their space.  That scientists must connect with the problem that are trying to solve. Can an agricultural scientist truly make revolutionary discoveries in food production when only stuck in a lab, or behind a computer?

Lundgren says that scientists must once again get their hands dirty in any agricultural domain they’re working in.  Could that type of immersive science accelerate large-scale adoption and grow the regenerative movement? Yeah! More good science from talented scientist is a foundation for growth.

It’s time for a change. The old stuff is broken. We need a new approach, but this systemic change stuff can be really hard!  There’s all kinds of entrenched interests too.  Lundgren teases us with the notion that this movement could be turned into a revolution with an ecological enlightenment of the scientific community.

tune-in to find out what it’ll take to…

You see, while working at the USDA, Jonathan Lundgren was an award winning superstar scientist bounding his way up the ranks.  Not willing to be silenced for his true and accurate work, Dr. Lundgren kept to his beliefs and stood tall for what’s right.  These types of folks in public roles, those that stick their neck out to fight corruption are often labeled as… a whistleblower. I think you’ll agree that Dr. Jonathan Lundgren would be better described as a guy who just says it like it is.

As for Lundgren’s POV – to instigate a paradigm shift in food and its production, it has to be done on the shoulders of farmers and with the scientific community that are ready to engage in Regenerative. I think he’s got it right. We need this apples-to-apples comparison with conventional. That analysis speaks the proper language to support the large-scale conversion from conventional to Regen. This may very well be the spine for the Regenerative playbook.

Food produced using innovative REGENERATIVE ADAPTATIONS (like the solutions discussed in this miniseries) will instigate a whole new way of thinking. Eating good food shapes our relationship with nature for the better, and sustains the stomachs of those who influence mindsets well beyond agriculture fields. Demand for this food produced using elevated standards has already skyrocketed. In this series we connect with those in the US leading a paradigm shift towards smarter LAND USE with good food production.