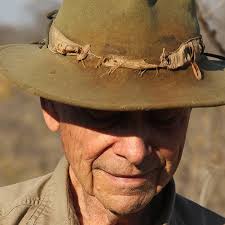 Set on addressing “the greatest problem facing humanity” – Allan Savory has spent a half century teaching us how to better connect with natural order.  Stemming from his early work to remediate desertification in the rangelands of Africa, Savory has developed a model of food animal management that could very well be our savior against climate change, and global instability.

It’s the proper management of animals that will be an essential part of the solution to address biodiversity loss and reverse the rapid warming of the planet.  As author J. Schwartz writes in “Cows save the Planet”, the disruptive forces of ruminants are actually the “crucible” of change in using soil to rectify climate change. Conventional methodology and associated reductionist theories to the environment, and our health, fail to evaluate that we’re all part of much bigger system that relies on being a link of the living nutrient recycling program. As Allan continues to prove, there are unlikely heroes in solving the most pressing global problems.  We need a more holistic approach in shepherding regenerative natural resources and managing how we feed ourselves on a shrinking planet, and that begins and ends with how we use our resources.

A symbiotic relationship between all microbial living things has effectively resulted in a living sponge that surrounds the planet. Often referred to as the earth’s thin skin, this living soil is so more than that.  It’s in fact the entire digestive tract for any and all living matter that has existed over the last billion years since bacteria and fungi started playing nicely together.  A few hundred million years ago, those relationships began incorporating larger flora and fauna into the recipe, and through time a proper balance was struck amongst all shared ecosystems to cycle nutriment needed for every trophic level through the microbes teeming in soil.  Basically, our health and that of our environment is uniquely connected to this living soil.

Ecology has become supremely efficient in closing the energy loop.  What remains is only the regenerative living matter designed to recycle energy, and the dander called petroleum. The system that created and stored this energy in the first place is hungry to return itself back to an equilibrium.  As systems thinkers – that is just commonsense!  Although, the described conduit of remediation, large food animals, doesn’t seem that for many with a linear mindset.  In fact, food animals are now defined by conventional wisdom as a fundamental driver in climate change equal to human emissions?!  Well, we have a lot to learn from Allan. Whether it’s the detrimental results of confined management or net positive of holistic – it’s all management practice, and not the animals themselves.

How we got here:

Just in the past few centuries we’ve unknowingly begun to tweak the process again.  And, in the last 50 years – scale of this disruptive approach has begun catching-up with a stable environment and again changing a once thriving ecosystems for the worse. Today, as our growing footprint and modern agricultural practice has effectively lopped off a few key links in the chain throughout the world – the collective is proving incrementally detrimental to diversely connected biomes. Hard to believe that taking ruminants off pasture can disrupt our existence, but with the grand scale we’ve instituted change  in such a short time – the unintended consequences to systems that take millions of years to balance will prove immensely disruptive unless we begin appreciating how to define broader solutions and not remedy of symptoms. Through Allan Savory we’re learning that when properly managed –  the matter that constitutes the sponge of our soil can be reinstated back to an original purpose from which it evolved.  A system of unparalleled storage capacity which provides a fix to a water & carbon issue spiralling out of control.

It’s all about the Management:

It’s based on a concept called nutrient cycling – a process similar but much broader to what happens in our own bodies. In fact, the breakdown of materials by microbial life in soil is not that far removed from what happens in your gut. By removing the waste stream of grazing animals and the results of the actions of their predators (equally an essential part of the puzzle) from once thriving grasslands we’ve systematically changed the nutrient cycling programs of most of the world’s great grasslands.  From sub-saharan Africa, the Great Plains of North America, the Southwest of the US, many Northern parts of the Far east, and a good portion of Australia – we’ve disrupted the essential nutrient cycling and stopped the flow of recycled energy on a significant portion of ground cover around the world. Effectively, taking the animals who harvest, fertilize and aerate the soil has resulted in dormancy, compaction, loss of biodiversity on that land leading to a general lack of resilience especially when dealing with the impact of other natural elements like wind, storm, flood or drought.

The organic matter and bugs in healthy topsoil hold 10X the volume of water as conventionally treated agricultural lands, never-mind dormant desert soils lacking thriving biology needed to maintain living plants that were once so important in feeding the pastoral animals. Collectively, and not unrelated – they no longer exist together. Removing animals, and categorical poor agricultural tilling & irrigation practice result in lesser ecological vigor in the once living soils of the global grasslands.  This has resulted in epic topsoil runoff, loss of fresh water storage, excessive carbon release and a lack of sequestering capacity.  A grand scale squeezing of the once massive grasslands sponge creates further dystopian scenarios for any of those animals that remain disconnected as a broken links in the chain. Representing 60% of the earth’s land cover, what we’re realizing is that grasslands are set to change all of our in-connected existence – including that of a stable environment for us all – unless we begin to give them their due.  Furthermore, as slash and burn practices destroy much of the ecologically sensitive tropical forests and forest land, and more folks enter the fossil fuel burning lifestyle – we’re going to need a broader solution with fast acting results.  The exciting part of Allan’s plan is the remediation to an unbalanced system is pretty straight-forward, and the unintended consequence leads to a cleaning a food system and improved human and animal health.

resolution: Engaging global grasslands to save ourselves, and feed a shrinking planet:

All of that considered – the hypothesis of returning the highest trophic levels back to the ecosystem under proper guidance and practice in effort to jumpstart co-evolution and best recalibrate the system to once again thrive as it did before our meddling seems one of the most pragmatic plans we’ve got as it comes in tow with economic drivers correlated to evolving consumer demand for better quality foods.  Simply, focused first on the single largest segment of food – animals – cleaning our food production models through pastoring hoofed ruminants and free-range fowl on grasslands and silvopasture (combined effort of forestry & grazing) we make significant strides in controlling our destiny through focus on Onehealth of animal, human, land & environment.  Allan and his teams around the world are set on changing many misnomers by introducing large scale herds of animals, wild and food alike, back into systems where the collaboration will benefit the wellness of all living matter through a progressive plan of adaptive nutrient cycling from Land to Market – through a focus on OneHealth.

The supply chain disruption of plant ready nutrients is driving many of the grasslands around the world to a point of desertification.  Allan, and now many others including myself, believe that integrating animals back into the equation begins a systemic evolution back – reinvigorating the nutrient cycling programs that will again give the living soil the ability to sequester the excessive amounts of carbon we’ve dumped into the environment over the past 100 years.  This is more than just common sense, there’s a great deal of evidence supporting Allan’s immersive Holistic Management biomimicry plan that uses systems-based resource management focused on raising and rearing healthy animals back into natural environments as the crux of change. With thirty years under their belt, and tooled with analysis and empirical evidence from thousands of years of agricultural practice used prior to modern CAFOs (concentrated animal feedlot operations), the Holistic Management Institute, and since 2009 the Savory Institute with its expanding global hubs, have been working diligently to change producer awareness to the broad reaching value of a regenerative agricultural approach.

solution: You & me, and how we decide to feed

Today, as we the consumer have begun asking more questions relating to that of food’s value – more folks have begun speaking with their dollars.  This increasingly makes us more savvy and concerned with compromises incurred with conventional production vs. that of circular agriculture’s focus on an integrated outcome of Onehealth to all living things in the food chain (including us) and the environment we share.  To this, as more awareness and education come to bear – it seems prime opportunity for additional free-market influential companies (strategics) to jump on board in servicing growing consumer sentiment driving food as a pillar of human and planetary healthcare.