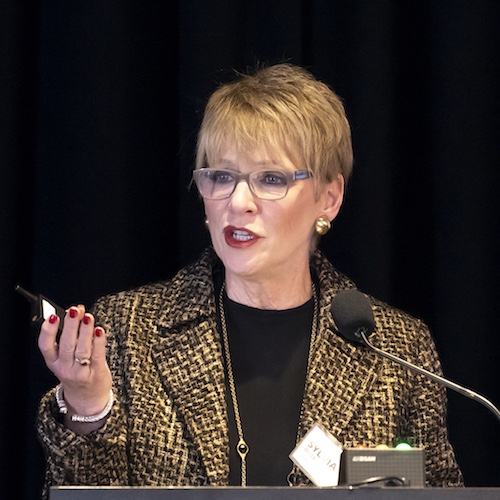 On episode 56 we welcome newly appointed CEO of AquaBounty, Sylvia Wulf for an engaging conversation that explores a new frontier of food production.  Wulf is an industry leader who’s directly responsible for coaxing large scale production and distribution to become more sustainable, more responsible and more appreciative of market trends of a modern consumer over the last 25 years.
. Prior to AquaBounty, Sylvia was President of StockYards, SVP of Merchandising, and President of the Manufacturing Division for US Foods.  A $23 billion broad line foodservice distributor, US Foods is the the 2nd largest foodservice distributor in the US.  Wulf was responsible for the P&L of the $10 billion protein and produce categories and the $1 billion Manufacturing Division of U.S. Foods Meat, Seafood and Produce operations. While leading this anchor division, Wulf developed a source to sale strategic approach that not only improved profitability but drove growth in market share at 3X the industry average. In her numerous roles responsibilities included the P&L of Perishables categories, centralized sourcing/replenishment, 15 manufacturing facilities for Meat and produce.
.
As of January 2019 Sylvia Wulf has taken the reins at known salmon producer and seafood innovator – AquaBounty.  For the past 20 years AquaBounty has sought federal approval for their transgenic engineered fish which sets to localize domestic production while reducing the use of synthetics and antibiotics in their approach of farm raising fish.  It’s not the molecular scalpel used in tweaking RNA expressions as we’ve learned about with CRISPR, it’s DNA manipulation. But, it’s done for a different purpose and with different intent than we’ve seen with past GE or GMO crops so prevalent in seed production. The IP AquaBounty is interested in moving is a methodology for producing fish, cleaner and healthier fish they say.  It’s surely not designed to move more harmful proprietary chemicals sterilizing soils and the planet. And, BTW – the fish they produce are sterile, so there’s no concern with cross-pollination with natural stock.
.
It’s fascinating to explore this from a few different angles.  No doubt it’s a pressing and timely subject with a stigma.  We must all appreciate that this is being rolled out, now – through-out the US.  AquaBounty has FDA approval and will soon be part of our current food production system. What needs to be determined is how it’s labeled.  They’ve instituted numerous fail safes and they have a compelling message to why they believe the time is now to use their technology to clean-up many of the approaches used in farming fish.  So, how do we all find commonality?  How do we evaluate all the biological, ethical, social and environmental issues reaching our plate?  Tune-In to hear more.

‘Nutritionist to The Hill‘ Jay Vilar joins me as a first-time co-host.  Vilar is the founder, and a practitioner at ‘Nourish’ – a bespoke consulting company with a mission to educate, teach, and train people on the benefits of using food to heal your body and optimize your health.  Jay has always been on the forefront of using optimal health techniques, and bio-hacking his nutrition to achieve remarkable results in his career. Jay now spends his time teaching people how to use food to heal their body and speaks to businesses on how to optimize focus & productivity using nutritional and behavioral science.  Jay recently completed a Fellowship at the Rodale Institute, and just relocated from DC to join our crew in Boston.
.
Sylvia Wulf knows large-scale production and food distribution.  Throughout her career she’s worked diligently to elevate standards and improve the experience for a broad swath of consumers and food animals.  Tune-In to hear what she’s up to in her latest venture – for many reasons I know our audience will find intrigue in this 45 minute conversation.