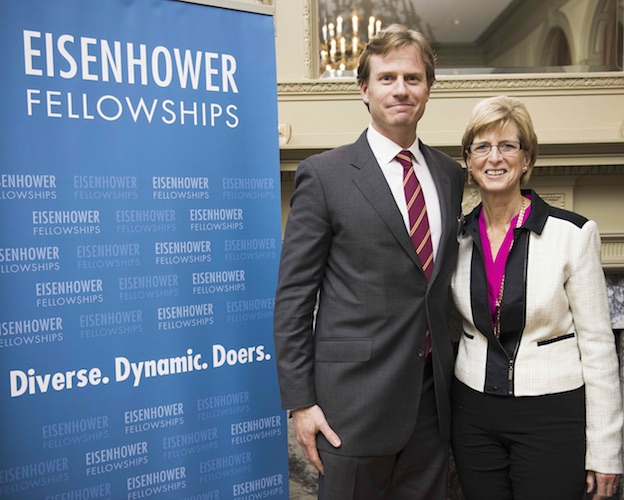 On episode 68 of Sourcing Matters we welcome Governor Christine Todd Whitman, the Vice Chair of the Eisenhower Fellowships board of Trustees. Joining as co-host is Eisenhower Fellow, Jennifer Hashley – the founder of the The New Entry Sustainable Farming project, and Pete & Jen’s Backyard Birds.
. Governor Whitman is American Republican politician and author who served as the 50th Governor of New Jersey, from 1994 to 2001, and was the Administrator of the Environmental Protection Agency (EPA) in the administration of President George W. Bush from 2001 to 2003.  Whitman was New Jersey’s first and, to date, only female governor, and also the first Republican woman to be reelected governor. Governor Christine Whitman is currently President of The Whitman Strategy Group (WSG), a consulting firm that specializes in energy and environmental issues.
.
From Jan. 1994 – Jan. 2001 – Whitman served as the 50th Governor of New Jersey. During our dialogue we learn that the Governor of the State of New Jersey constitutionally has the most power of any Governor in all of the 50 states.  We must understand that during her tenure – Christie Whitman earned praise from both Republicans and Democrats for her commitment to preserve a record amount of New Jersey land as permanent green space. She was also recognized by the Natural Resources Defense Council as having instituted the most comprehensive beach monitoring system in the nation.
.
As part of our 45 minute conversation we discuss her transformative work with the EPA to introduce legislation which held perpetrators for Brownfield contamination (a former industrial or commercial site where future use is affected by real or perceived environmental contamination) accountable.   We learn that it was Ronald Reagan who introduced climate change as cornerstone in the national security discussion. Now, using that as a call to action for all leaders no matter which side of the aisle, Whitman clearly differentiates between climate concerns vs. weather.  And, how polarization and finger pointing has been impetus for a political divide tied appreciation for climate change which has arisen together over the past 20 years ago.
.
As the Vice Chair of the Eisenhower Fellowship Board of trustees we learn how Gov. Whitman’s current role as an ambassador and mentor to a global community of future leaders continues to inspire her work.  Core to the mission of the fellowship program, Whitman states that “We have more alike than different.”  When asked what advice she has for folks seeking hiring office or for those seeking to become a Head of State – she explains “do the job you’re in, and the next one will come with hard work and commitment.”   Great advice for us all.
.
TuneIn to hear more from this Agent of Change..